Metahuman-Topher was born dancing on a virtual beach!

Some stills from a demo project for my NCSU ADN-460 course where I’m teaching students how to use Reality Capture to photogrammetry their head, so that they can make a Metahuman of themselves in Unreal Engine 5. They then export the model to Autodesk Maya for animation using mocap from our Noitom suit, and for fitting custom clothes in Marvelous Designer. The final animation is rendered in a UE5 themed environment that they build using Quixel Megascans. We are also using the uDraper plugin in UE5 for real-time cloth simulation as a test for using this technology with our LED wall in the Art2Wear live-event held every spring semester.

Here is a video of my class demo and some of the final student projects:

November 17th 2022, I gave a lecture on “The Ethics of Playing Black Bodies in VR” based on my recent book chapter in The Changing Face of VR  (Vernon Press, 2022). This was part of the NCSU Art & Design Fall Lecture Series titled Emergence. Here are my slides and a Zoom recording of the talk:

July 22nd 2022, I have a chapter in the new peer-reviewed book The changing face of VR: Pushing the boundaries of experience across multiple industries, edited by Dr Jordan Frith and Dr Michael Saker (Vernon Press, 2022):

Abstract: Using Augusto Boal’s Theatre of the Oppressed role play principles of a “spectactor” and joker figure as a performative lens, I analyse VR storytelling experiences by artists of colour that confront social justice issues and educate on Civil Rights history using a variety of platforms from 360 video to room-scale VR installations. I argue that narrative framing to cast a spect-actor into the body illusion of a protagonist of colour can be done ethically, and role play with NPCs designed as joker figures representing the oppressed community can promote empathic understanding.

Read an abbreviated sample of the chapter…

July 9th 2022, I presented a peer-reviewed extended abstract of my work-in-progress SGRplay framework for analyzing RPGs and XR storytelling experiences to the 2022 Digital Games Research Association conference proceedings. Here are a PDF of the slides for my talk.

August 4th 2021, I published an article in a special VR Storytelling issue of the international journal Cinergie:

Abstract: This article examines The VOID’s Star Wars: Secrets of the Empire (2017) VR arcade attraction, and analyzes the intermedial magic principles employed by co-founder and magician Curtis Hickman to create the illusion of a fictive world with impossible space and liveness. I argue that The VOID (Vision of Infinite Dimensions) functioned like nineteenth century magic theaters run by Georges Méliès and others, by employing magic principles of misdirection that directed player attention towards the aesthetics of an illusion, and away from the mechanics of the effects generating technology. Narrative framing and performative role play transported multiple players into a believable Star Wars immersive experience, creating an aesthetics of the impossible that reflected the goal of many stage magic tricks, and was foundational to trick films in the cinema of attractions of the early twentieth century. Using game studies concepts like Huizinga’s magic circle and theatre arts concepts like Craig’s über-marionette, this article suggests that The VOID and other stage magic approaches to VR, like Derren Brown’s Ghost Train (2017), are a new medium for participatory theatre that incorporate immersive features from both cinema and games.

Our National Endowment for the Humanities and Epic Games Megagrant funded research project Mitchelville AR Tour, as well as our Prehistoric Florida project for the Museum of Discovery and Science, were featured in FAU’s Owl Research & Innovation Fall 2020 issue, on pages 19-21:

On Feb 21st we hosted an Ethical XR Symposium with SCMS Multimedia Studies faculty at Living Room Theaters on the FAU Boca Raton campus. Magic Leap participated in the demos with MTEn MFA students, and talks were given by media scholars from around the country, including Harvard, NYU, and Columbia (photos by Topher Maraffi and Nicole Morse): 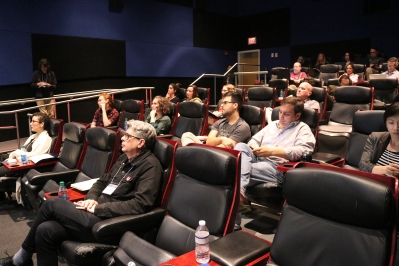 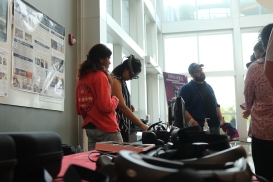 FAU Media, Technology, and Entertainment students in my XR Immersive Design course showed their research project prototypes at Research Encounter 2020 on Feb 12th. Hosted by the FAU Division of Research, we conducted demos of several projects on the Magic Leap and Oculus Quest headsets. FAU President John Kelly stopped by to see what we have been working on, and there were many attendees from the university and Boca community (photos by Brandon Martinez and Topher Maraffi): 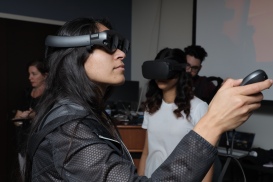 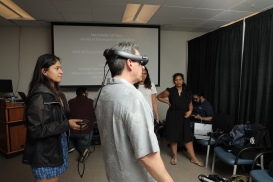 FAU SCMS and Computer Engineering faculty taught a STEAM (STEM+Art) summer school course for high school students that focused on designing and developing augmented reality (AR) apps for research posters. This course is part of the Fort Lauderdale Museum of Discovery and Science (MODS) Apptitude internship program, and runs for three weeks in the summer at FAU Boca campus. Students learned how to create an AR app in Unity game engine that displayed green-screen video and animated 3D models on their research posters for museum exhibit topics.

Students working in class and the Freshwater habitat group poster: 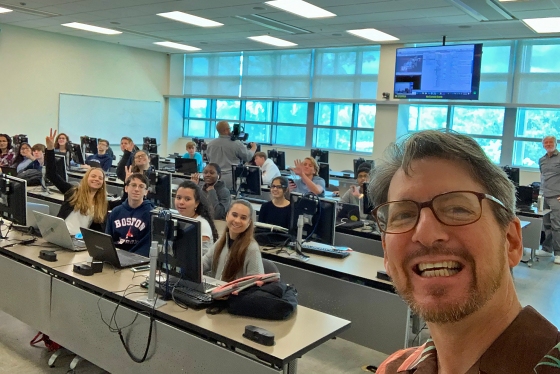 A video of the last week and final AR poster presentations: 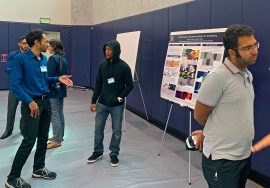 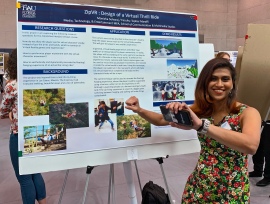 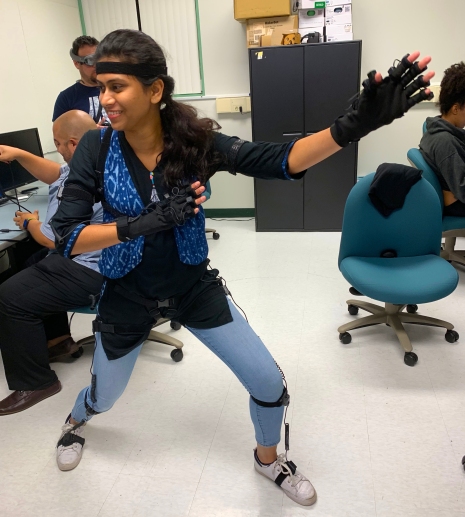 We had the second USCB Film and Digital Media Symposium in partnership with the Beaufort International Film Festival, with a Sea Island Center gallery reception, lightning round talks from USCB faculty and BIFF filmmakers, and a keynote talk by The Simpson’s director Mark Kirkland. 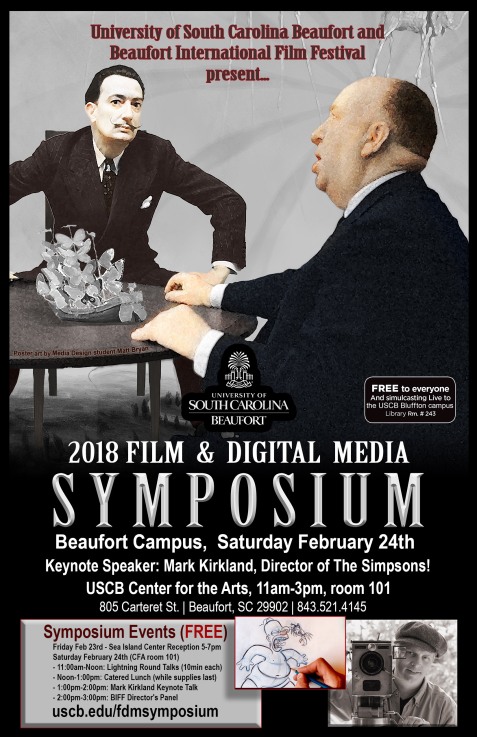 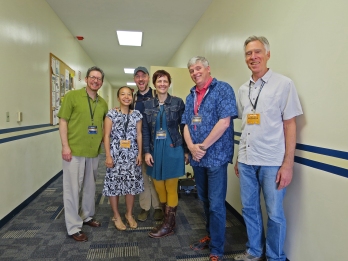 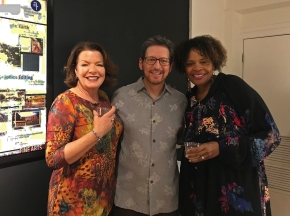 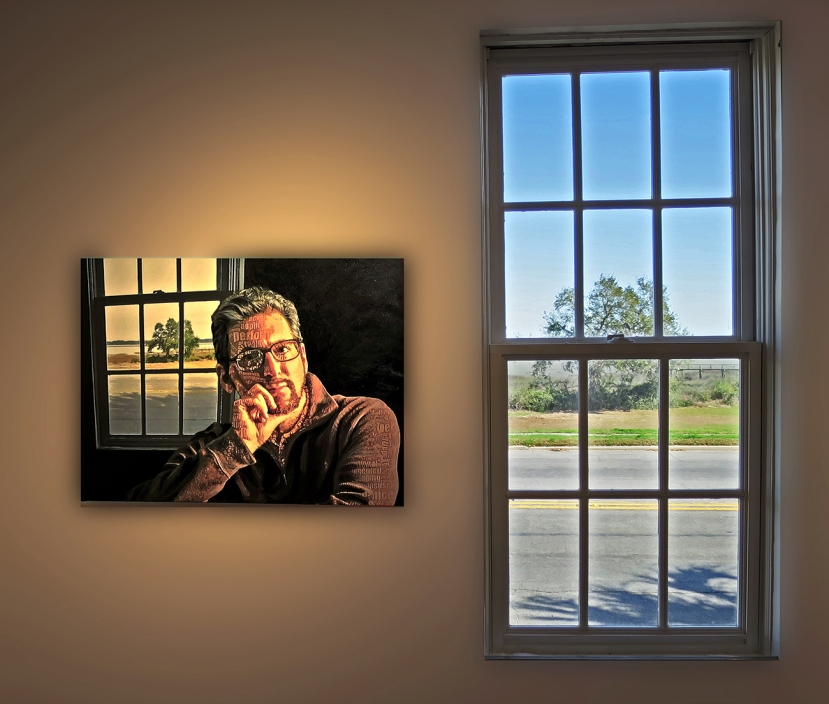 “Self Portrait” (32”x24”), Digital composite print on canvas, and then layered with acrylic paint, Spring 2018.

In November, see the latest artworks by USCB Fine Arts faculty at Sea Island Center gallery on the historic Beaufort campus. Here are some pictures of our opening reception on Thursday November 2nd. The show featured two of my mixed-media canvases and digital imaging studies, as well as a poster and teaser video on my documentary project.

This year I am showing three creative works and related practice-based media arts research that began as class demonstrations in my 2017 USCB courses. 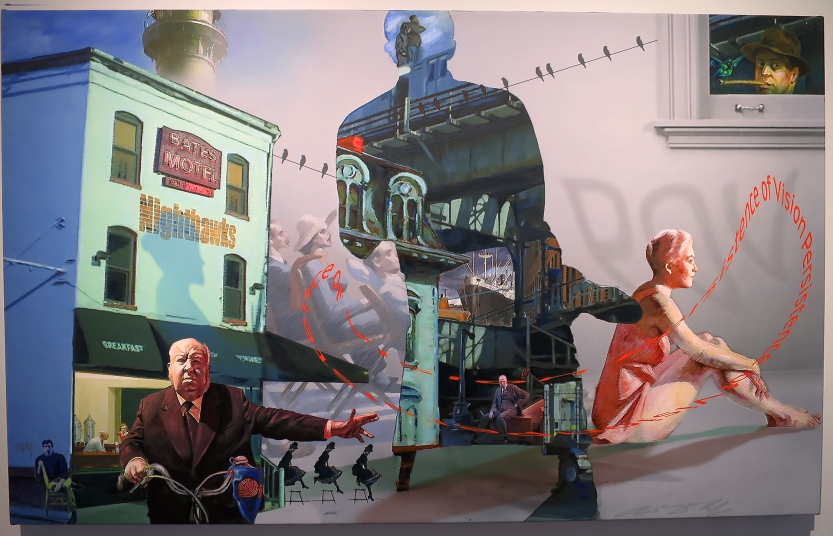 The piece displayed in the main gallery entitled Persistence of Vision: Coasting Ahead, Hitch Throws Hopper the POV Sign was started as a compositing demo in Adobe Photoshop for my Fall 2017 MART B102 Media Design course. The POV theme refers to the nineteenth century concept of the same name that gave birth to cinema. The term described the visual phenomenon that a sequence of images played at a sufficiently fast rate creates the illusion of continuous motion. More conceptually, POV is being used to reference the evolution of a visual aesthetic that was first introduced by Renaissance painters experimenting with optical devices, evolving to the techniques used in chemical photography and cinematography, and very much employed by digital artists today. The compositing process I demonstrate in my course uses the same techniques Renaissance painters first developed in the Fifteenth century; staging a scenic narrative from a variety of image sources, modeling the curvature of forms with high contrast lighting, and using perspective lines to create the illusion of depth. 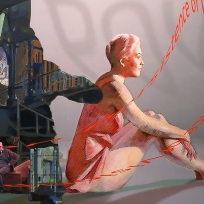 In addition to exploring concepts related to the POV theme, students were required to research at least one cinema artists and one fine arts painter that relate to each other, such as Alfred Hitchcock and Edward Hopper, and then digitally compose an image that incorporated visual and style references from both. My demo piece referenced how Hopper was inspired by early cinema, often going to the movies for weeks at a time, and how Hitchcock staged scenes that echoed the aesthetics of a Hopper painting. Source elements were significantly processed through digital filters to create a unique aesthetic, and the Hunting Island lighthouse was incorporated to relate the scene to Beaufort. Then I printed the digital composite on canvas so that I could hand paint acrylic glazes onto the surface, adding a final layer of texture and color depth to the piece.

The mixed-media piece in the hallway entitled Lab Monitor, with related studies and research poster, was also started as a class demo inside of Adobe Photoshop. However, the work went through a more complex process of alternating between digital and physical media in my MART B145 Digital Imaging course. We initially used digital photography to crowd-source images of a scene in our lab where I did a simple action of rotating in my chair. Students used the photos to explore David Hockney’s “joiner” collage technique, where photos are treated like brush strokes to create a Cubist representation of motion in time and space, but inside of Photoshop. This allowed us to process source photography through paint filters to make them more compatible with physical media, and then to print the final result on matte paper to enhance with ink, colored pencils, and paint. The next stage of the project involved using the prints to create texture maps in Blender 3D software and model a digital representation of the original scene. We then imported the scene into Unity game engine to make a “joiner” game where we could interactively create Hockney style collages through a photography play metaphor.

I composited several of these game-generated collages to create the final image that was printed on canvas, and then layered with physical media to add the hand of the artist back into the work.

The Jumpin’: SC Roots of Swing Dance video teaser and research poster shows work being done related to my MART B250 Broadcast Design course. This project involves using the latest digital filmmaking techniques, including visual effects and motion graphics, to create a PBS-style feature documentary on how swing dancing in the early twentieth century originated from the Gullah-Geechee culture in Beaufort County. The pre-production research displayed in this work was conducted over summer and fall 2017 with a Sea Island Institute grant, in partnership with SCETV, including storyline and visual development for motion graphics, backgrounds for green-screen interviews, 2.5D visual effects, and lower-third graphic designs.

I am an Assistant Professor of Realtime VFX and Virtual Production at NCSU, where I teach game design, 3D animation, and extended reality courses in the Art + Design Dept.