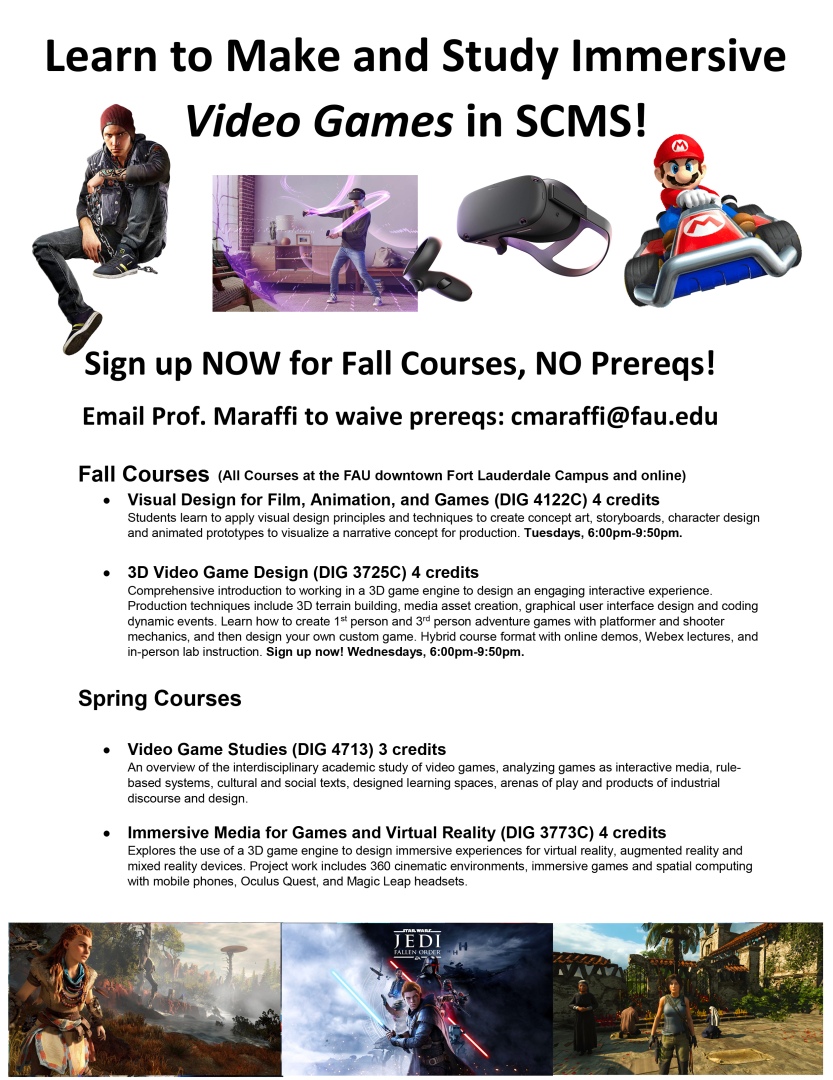 Spring 2020 Undergraduate students in my Video Game Studies (DIG 4713) course created research posters for game analysis and gaming culture. Games were analyzed according to popular game design methods like the MDA (Mechanics, Dynamics, Aesthetics) Framework and the psychology concept of Flow, as well as a novel new framework called SGRplay (pronounced sugar+play), that I developed to analyze three types of play (screenplay, gameplay, and roleplay) in games. Some selected game analysis posters: 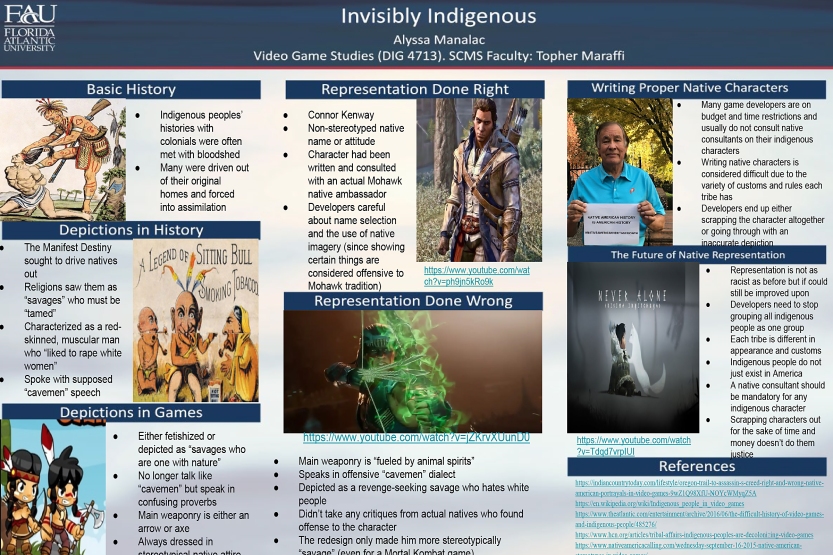 Spring 2020 in my new Immersive Media for Games and VR (DIG 3773C) course, students created AR shadow box 3D scenes of classic transmedia literature, such as Mary Shelley’s Frankenstein, Arthur Conan Doyle’s Sherlock Holmes, and Charles Dicken’s Christmas Carol. Here is a Youtube video of a tutorial I made for the course:

Some student demos of AR shadow boxes from the Immersive Media course:

Here is work from our Visual Design for Film, Animation, and Games (FIL4703) and Preproduction, Prototyping, and Previsualization (DIG6546) courses, where students take an original concept through the design process of concept art, storyboards, and animatics. 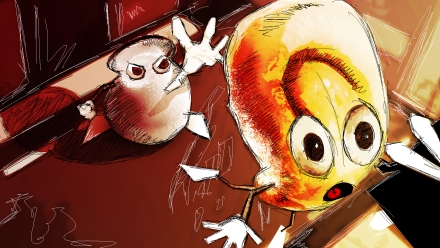 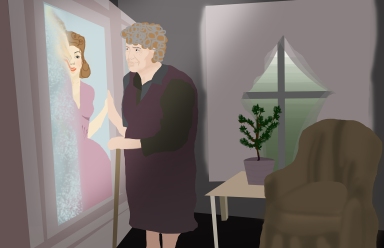 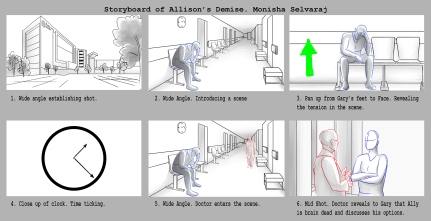 Here is an undergrad research poster from the pre-production course:

My Special Topics: 3D Game Design (DIG4930) and 3D Production for Interactivity (DIG6547) are also cross-listed in the fall semester. In this course students learn how to use Unity game engine and the MDA game design framework to create a 3D adventure game that has a specific look and feel. Here are some screenshots from their projects: 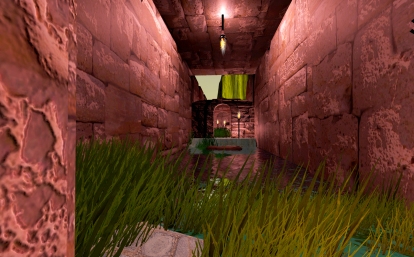 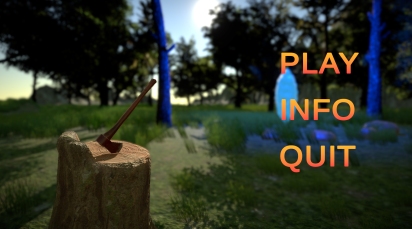 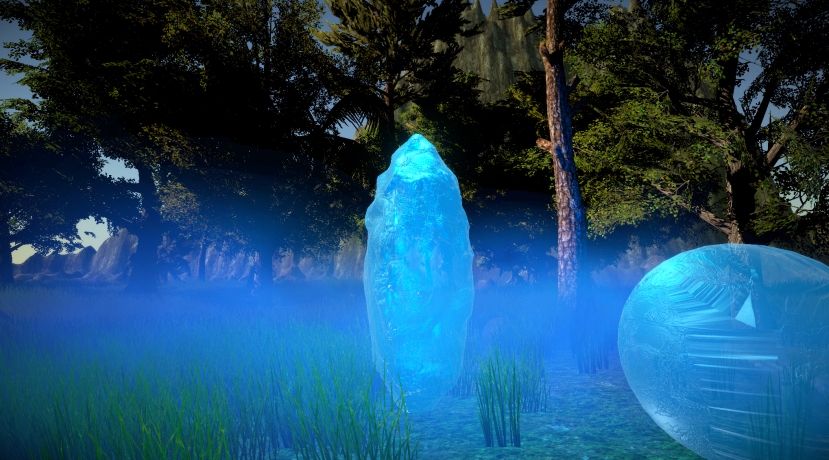 Here is an undergrad research poster from the game design course:

In my former USCB Media Design courses, I introduced students to 2D, 3D, and interactive design principles using a variety of digital software. Each course had a conceptual theme to develop student projects, such as “Digital Renaissance” or “Emerging Artists”. In the Fall 2017 course the theme was “Persistence of Vision”, where students researched a painter and filmmaker that inspired each other, such as Edward Hopper and Alfred Hitchcock, exploring how aesthetics often flow across media and disciplines. 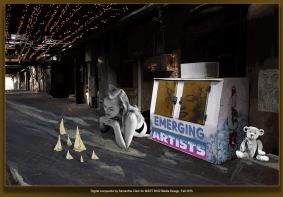 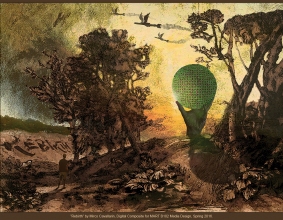 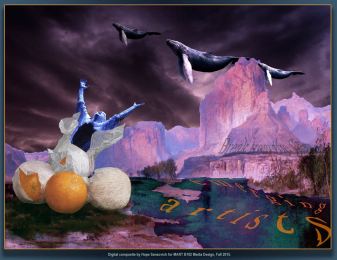 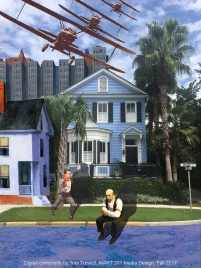 Student work was cumulative, building on previous assignments, with more complex software and concepts developed in each step. After completing their 2D imagery, students would learn how to make their artworks into paintings on walls of a 3D gallery in Blender. They learned to apply 3D design principles in virtual space, and use modeling and texturing techniques to create a simple kinetic sculpture. Then they animated a camera fly-through to display their gallery as a rendered movie. 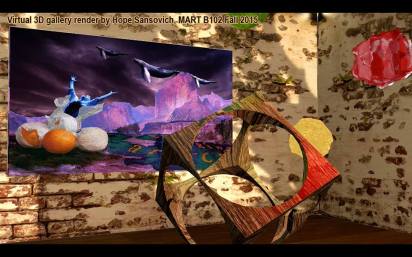 A sample of student 3D gallery animations, many the first time using Blender:

The work of two Media Design students were featured as posters for our 2017 Film & Digital Media Symposium:

In my former USCB Digital Imaging courses, I introduced students to practice-based arts research and the Hockney-Falco thesis, developed by the artist David Hockney and optics scientist Charles Falco. They contend that painters as far back as the Renaissance may have used lenses and mirrors to develop the first photographic aesthetic. This shows students the continuity between historical painting techniques and modern cinematic media, even the rendering and shading techniques in 3D video games. Students explore Hockney’s 1980s “joiner” collage technique in digital software, ultimately seeing how the 2D technique could be extended into Blender 3D software and the Unity game engine. 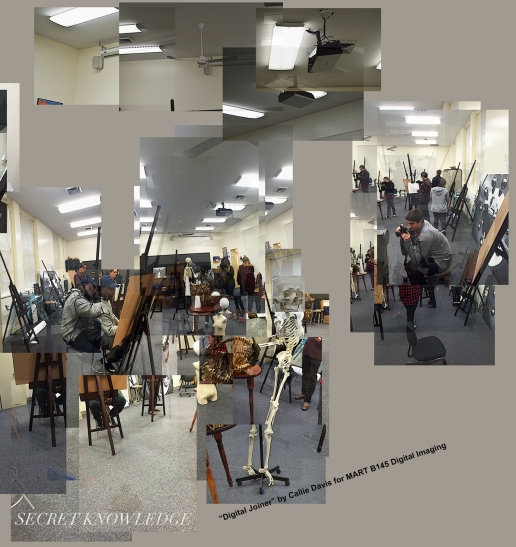 In spring 2017, the project was similar, but students focussed more on making the imagery more painterly using filters in Photoshop, and by printing on paper to add physical media. 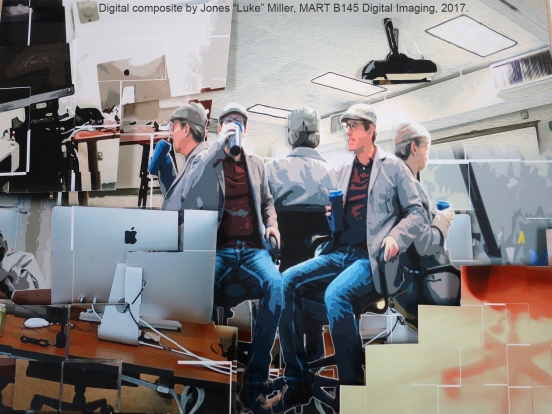 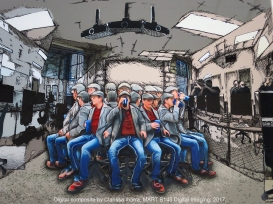 This survey course I taught at USCB on American animation fulfilled upper level art history credits, and conceptually supported my other production-oriented MART courses. Students learned about the artists and technologists that developed moving pictures since the nineteenth century, from the birth of cinema to contemporary digital media.

Students also wrote papers on topics related to the pioneers of cell and stop-motion animation from the early twentieth century, which showed how techniques evolved with contemporary digital technology. For their final, they designed a research poster that summarized their papers and other work in the course:

There was also a hands-on component to the course where students created simple animations based on historical techniques, using digital software such as Adobe Photoshop, Premiere, and Blender 3D. Here are some student animation cycles based on the horse photography of Muybridge and the 2.5D parallax effect of Disney’s multi-plane camera:

My former USCB Digital Animation courses at USCB taught students how to create a short 3D character animation in Blender. Students started by doing simple exercises that related to Disney’s historic principles of animation, such as animating a bouncing ball, flour sack, and a biped walk cycle. They then designed an original character-based narrative that they can take through the pre-production, production, and post-production 3D software pipeline. Here is a sample reel of some student character animations:

My former USCB Broadcast Design courses focused on teaching students how to produce educational PBS-style media, including shooting green-screen interviews in a three-camera SCETV television studio with a Tricaster Advanced Edition switcher, shooting B-roll footage with the Canon and Panasonic field packs, editing in Adobe Premiere, and doing post-production motion graphics and visual effects in Blender and Adobe software. Students learned documentary filmmaking techniques like the Ken Burns Effect and the 2.5D parallax effect to make still photographs seem more like video. These courses are interdisciplinary, and appealed to both media arts and communications students. 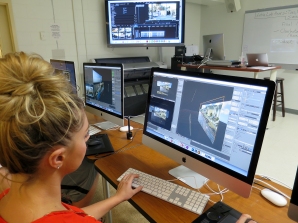 An award winning student research poster on the production process:

We also developed internships with SCETV to produce local content for shows like Palmetto Scene. Here is a segment two of my interns did on the Beaufort International Film Festival (BIFF) during the spring 2017 semester:

Here is an example where students developed levels for our USCB Lowcountry Golf 3D game in Unity. 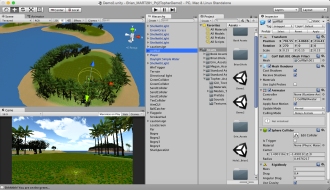 A video demo of gameplay in our first version of the game in spring 2016:

In my former USCB Graphic Design courses students were assigned a real-world commercial branding project to create posters illustrations in Photoshop, logos in Illustrator, motion graphics in Blender, and a web site in Dreamweaver. The spring 2017 class created graphics for the USCB Film & Digital Media Symposium during BIFF.

At UCSC, I taught the COSMOS Game Design cluster for high school students gifted in STEM. For one month students lived on campus Monday-Friday, and came to class for five hours per day. I taught my cluster how to create games in Gamemaker, Processing, and Unity Game Engine. It was an amazing experience to have so many talented young students enthusiastically making games for four weeks.